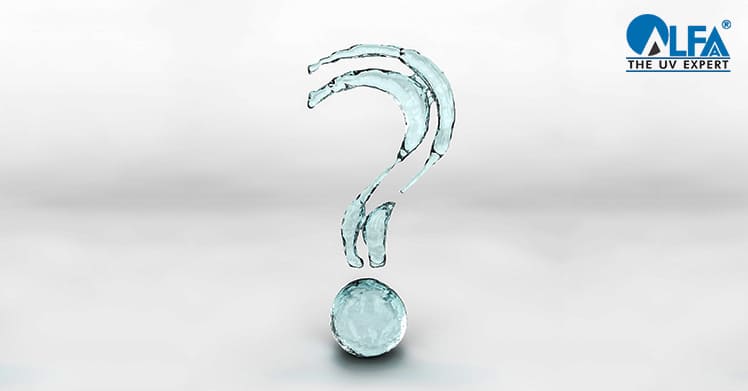 What is a UV disinfection system?

Ultraviolet (UV) is a physical water treatment method that helps disinfect water. It inactivates pathogens, microbes, and microorganisms by permanently destroying their DNA, rendering them ineffectual so they can’t reproduce, which eliminates the risk of infection. It makes use of no chemicals, so its 100% chemical-free. UV is also used to remove some chemical contaminants from water such as chlorine, ozone, and total organic carbon (TOC). Thus, the UV disinfection system is a great option for fast, safe, and effective water treatment at an economical price.

What is the purpose of disinfection?

The primary purpose of disinfection is to offer an optimum level of water purification. By making use of UV technology for water disinfection, you are ensuring that the drinking water is free from harmful pathogens and microorganisms. Being a natural purification process, UV also ensures that the taste of the water, its colour, odour, and pH levels are not altered. Also, UV water disinfection is an FDA approved method, which also helps reduce water wastage.

What are the methods of disinfection of water?

Historically, the boiling of water was the widely used method for water disinfection. In modern times, chemical, physical, ozonation, and distillation are a few methods used for disinfection. Here, chemical and physical are the two popular methods for disinfection of water. The chemical method makes use of chemicals like chlorine, bromine iodine, silver, etc. The physical method, on the other hand, makes use of ultraviolet (UV) lights, gamma-ray irradiation, etc. Out of the two, using UV technology for water disinfection is found to be a more reliable, cost-effective and safe way to purify drinking water.

Which UV wavelength is effective For disinfection?

Ultraviolet (UV) light is energy within the electromagnetic spectrum which is invisible to the human eye. It works at a specific range of wavelengths, wherein a wavelength of 253.7 nanometers (billionths of a meter) is used for water disinfection since it has the peak germicidal efficiency. Here, it is important to note that the correct UV dose is applied in the water, as different organisms require different levels of UV dose to disrupt their DNA.

Does UV disinfect bacteria in the water?

Yes, it does. A UV disinfection system purifies water to the highest level. It inactivates up to 99.99% of all water-borne microorganisms, including bacteria, viruses, cysts, and protozoa provided the correct dose is applied. UV is also an effective and safe solution that helps destroy chlorine-resistant microorganisms without the use of any chemicals.

Is Chlorine effective for the disinfection of water?

The most popular chemical used for water disinfection is chlorine which, is largely effective except that there are some microbial pathogens, such as Cryptosporidium and Giardia, that are resistant to chlorine disinfectant, also chlorine when added to our water, combines with other natural compounds to form Trihalomethanes (chlorination byproducts), or THMs. These chlorine byproducts trigger the production of free radicals in the body, causing cell damage, and are said to be carcinogenic.

Due to these reasons world over Water treatment operators, both large and small, are turning to ultraviolet radiation (UV) as an alternative to reduce or eliminate the use of chlorine for disinfection since Ultraviolet (UV) water treatment systems compared to traditional water treatment methods, are reliable, effective, completely chemical-free, environmental-friendly, and create no harmful by-products.

What is UV-C or germicidal UV light?

UV light is the invisible radiation within a range of the Electro-magnetic spectrum.

It is measured in millionths of a millimeter i.e. Angstrom units (A) or nanometers (nm). 1nm = 10A

The UV-C band contains the wavelengths (250-270nm) which are very effective in destroying many microorganisms (optimum wavelength is 254nm). This range is also called the germicidal range.

What is the difference between UVA, UVB and UVC?

The UV-C band contains the wavelengths (250-270nm) which are effective in destroying many microorganisms (optimum wavelength is 254nm). This range is also called the germicidal range and primarily has a surface effect.

As sunlight passes through the atmosphere, all UVC and most UVB is absorbed by ozone, water vapour, oxygen and carbon dioxide. UVA is not filtered as significantly by the atmosphere.

Short-wavelength UVC is the most damaging type of UV radiation. However, it is completely filtered by the atmosphere and does not reach the earth’s surface.

Medium-wavelength UVB is very biologically active but cannot penetrate beyond the superficial skin layers. It is responsible for delayed tanning and burning; in addition to these short-term effects, it leads to skin ageing and significantly promotes the development of skin cancer. Most solar UVB is filtered by the atmosphere.

The relatively long-wavelength UVA accounts for approximately 95 percent of the UV radiation reaching the Earth’s surface. It can penetrate into the deeper layers of the skin and is responsible for the immediate tanning effect. Furthermore, it also contributes to skin ageing and wrinkling. For a long time, it was thought that UVA could not cause any lasting damage. Recent studies strongly suggest that it may also enhance the development of skin cancers

Yes, it can. Germicidal UVC lamps kill up to 99.9% of most viruses, airborne bacteria and mold spores.

If not designed, used, or implemented properly, direct exposure to germicidal ultraviolet equipment can have damaging effects on both materials and people. Overexposure to UV-C lighting can harm humans in a variety of ways, such as eye and skin damage. It can also cause damage to materials, such as the erosion of rubber gaskets or plastics.

However, when designed well, keeping in mind safety considerations UV disinfection is very safe, as no radiative properties remain in treated air/water and there is no fear of overdose.

What is UV Dosage?

UV as a disinfection principle is effective against all microorganisms, provided the correct dosage is applied. If the proper UV dose is not used, then the microorganism will not be killed and instead, be put only into a dormant state.

Is there a connection between ozone depletion and UV radiation?

Ozone is a particularly effective absorber of UV radiation. As the ozone layer gets thinner, the protective filter activity of the atmosphere is progressively reduced. Consequently, the people and the environment are exposed to higher levels of UV radiation, especially UVB.

Ozone depletion is caused by human-made chemicals released into the atmosphere and will continue until the use of chlorine and bromine compounds is drastically reduced.

International agreements, in particular the Montreal Protocol, are gradually succeeding in phasing out the production of ozone-depleting substances. However, the long life-span of the chemicals already released will cause ozone depletion problems to persist for many years to come. A full recovery of the ozone level is not expected until 2050.

Ultra-violet radiation (or UV) is a proven, effective process for disinfecting water, air or solid surfaces that are microbiologically contaminated.

The effects of UV as a disinfection agent have been well-documented by the scientific community.

The U.S. Environmental Protection Agency recognizes the use of ultra-violet as a proven, viable technology;

“Ultraviolet (UV) radiation has been found to be an effective disinfectant…. The simplicity of installation, ease of operation and maintenance, and low costs relative to chemical disinfection make UV a useful disinfection technology option.”

Why UV is a preferred method of disinfection?

Ultraviolet is preferred compared to other methods of disinfection due to the following reasons;

No! Germicidal UVC sterilizes only what it comes in contact with. It cannot penetrate through substances, which means it has only a surface effect.

Should UVGI Technology Be Used In More Public Spaces to Zap COVID In The Air?

Are You Confused About Choosing the Right Commercial Water Purifier for Your Business? RO or UV? Have you ever wondered how the world’s most eagerly aw... Read More 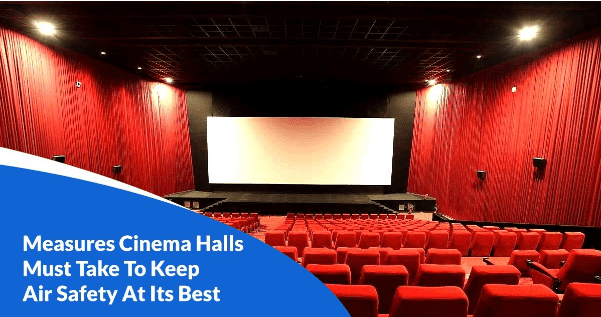 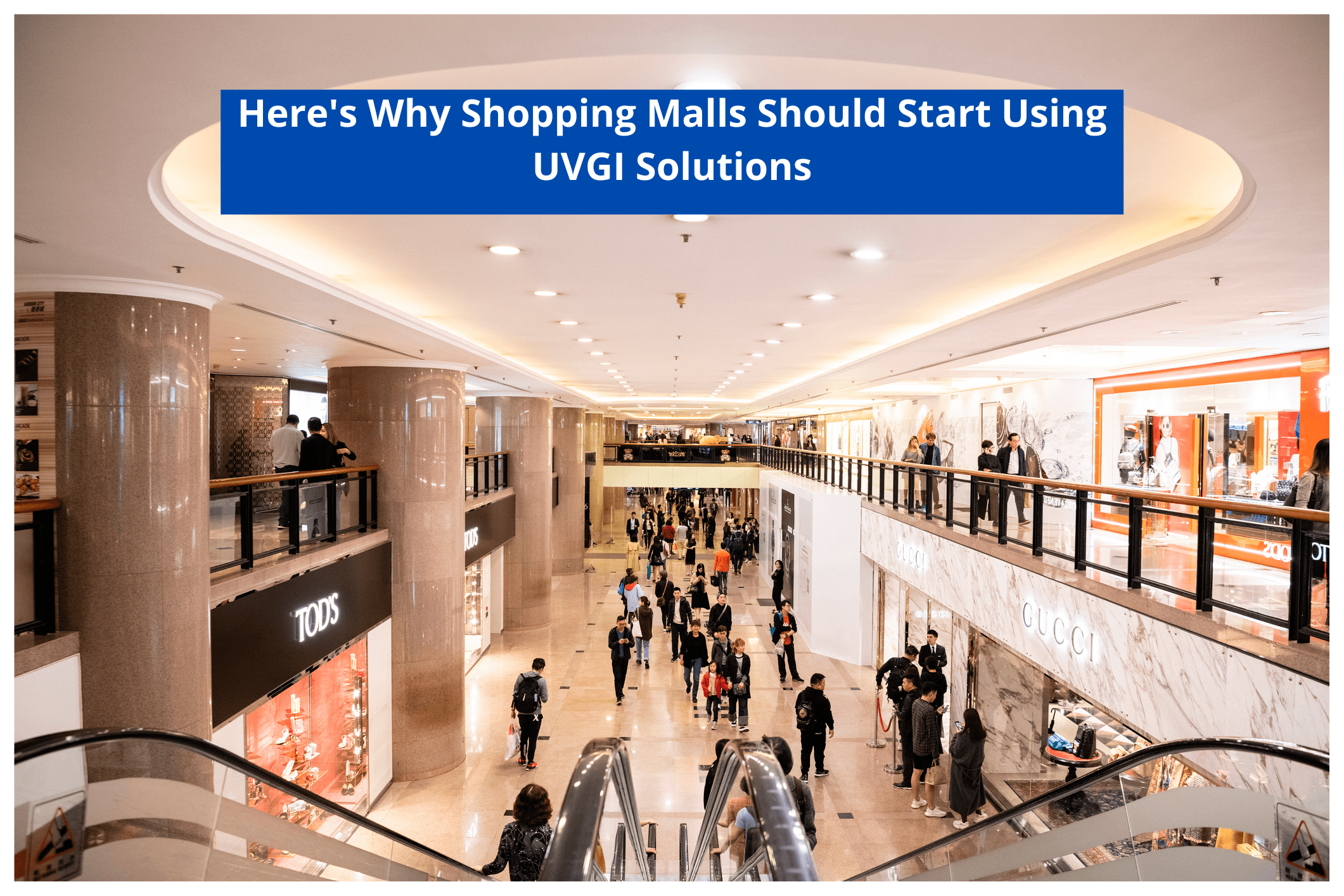 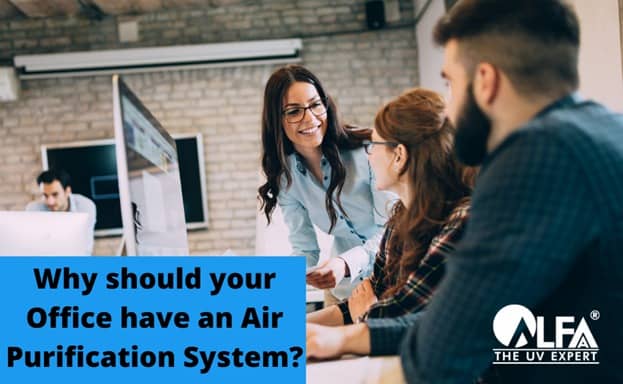 Why Should Every Commercial Space Have An Air Purification System?

Why Should Every Commercial Space Have An Air Purification S... Read More 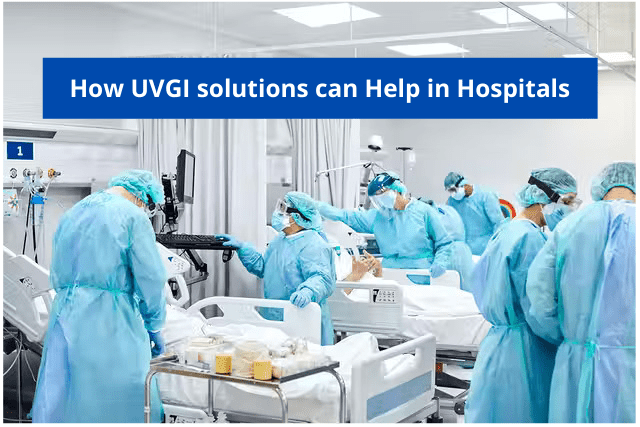 How UVGI Solutions Can Help in Hospitals

How UVGI Solutions Can Help in Hospitals It is a known fact ... Read More 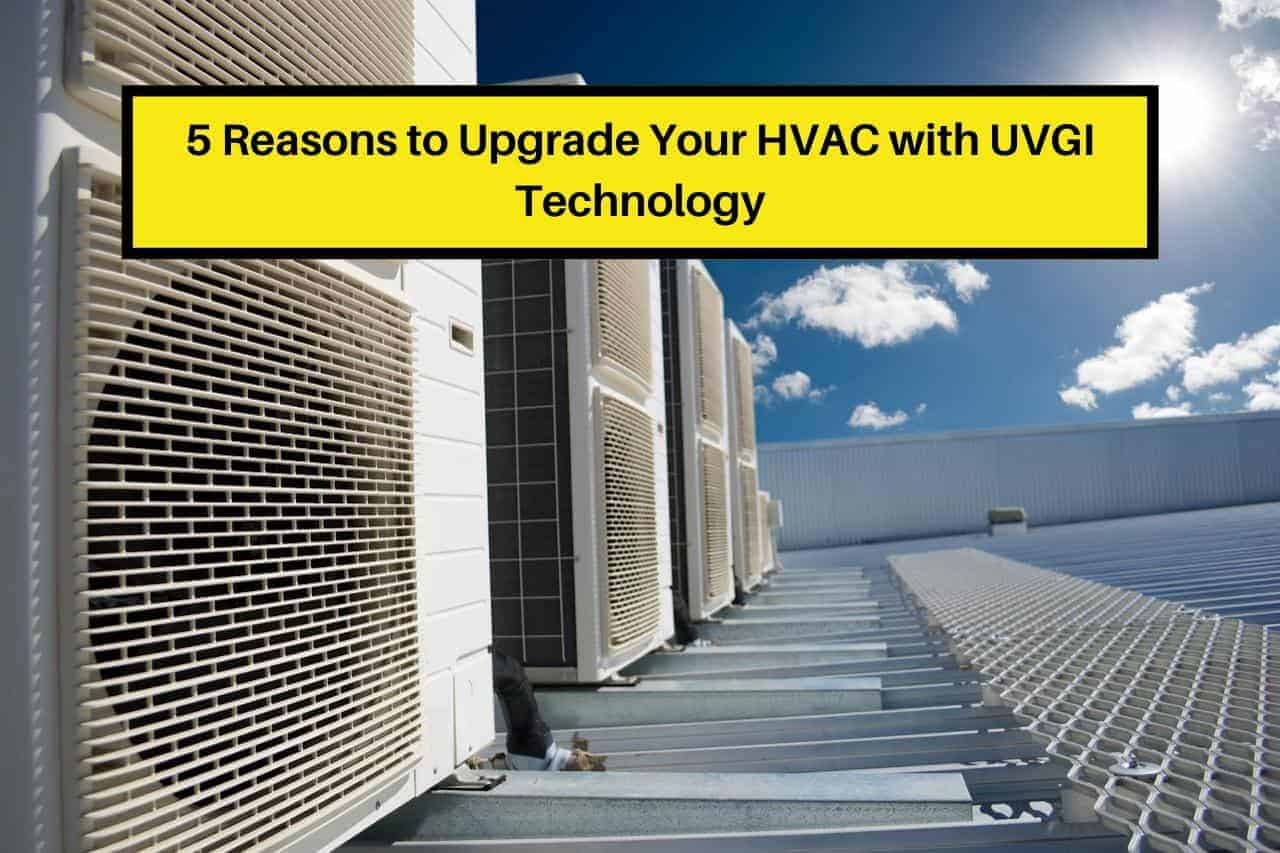 5 Reasons to Upgrade Your HVAC with UVGI Technology

5 Reasons to Upgrade Your HVAC with UVGI Technology The Heat... Read More 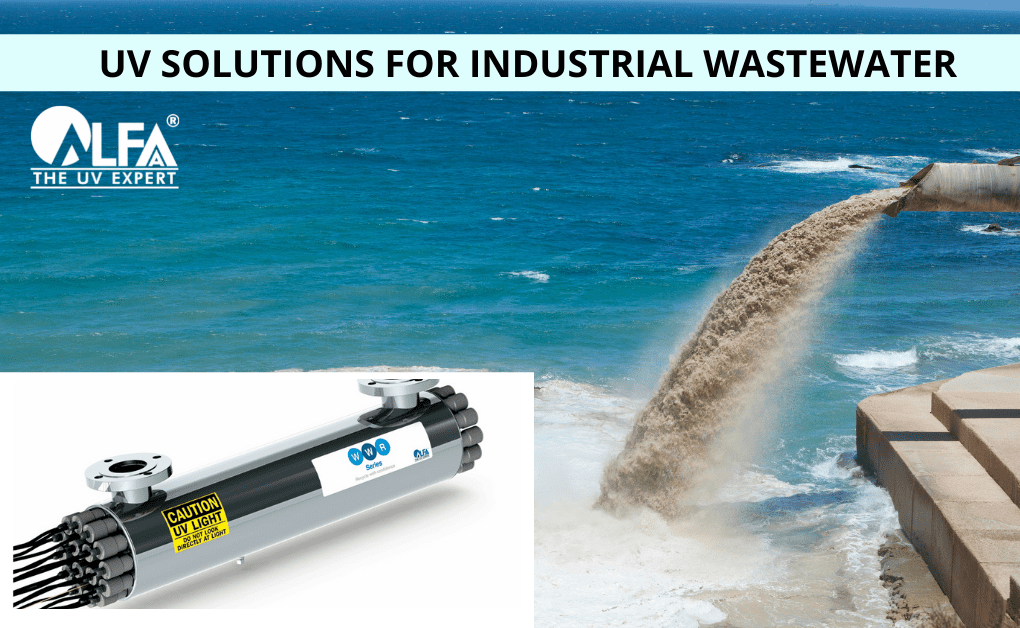 EFFECTIVE UV SOLUTIONS FOR ETP AND REUSE OF WASTEWATER

India is water-stressed – the demand for water is expe... Read More 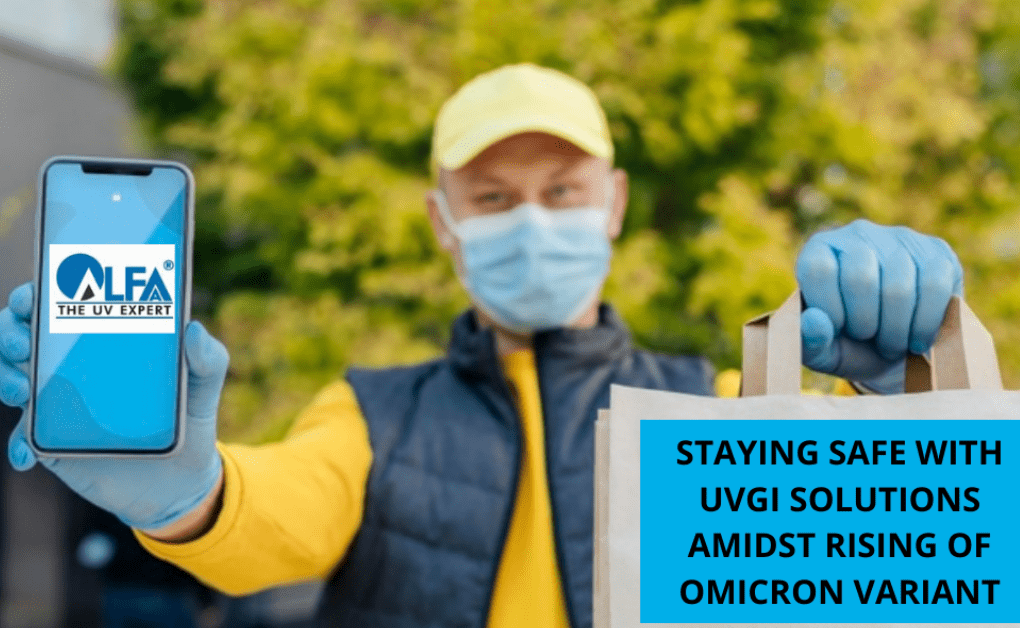 The third wave of the pandemic is starting to bite the India... Read More 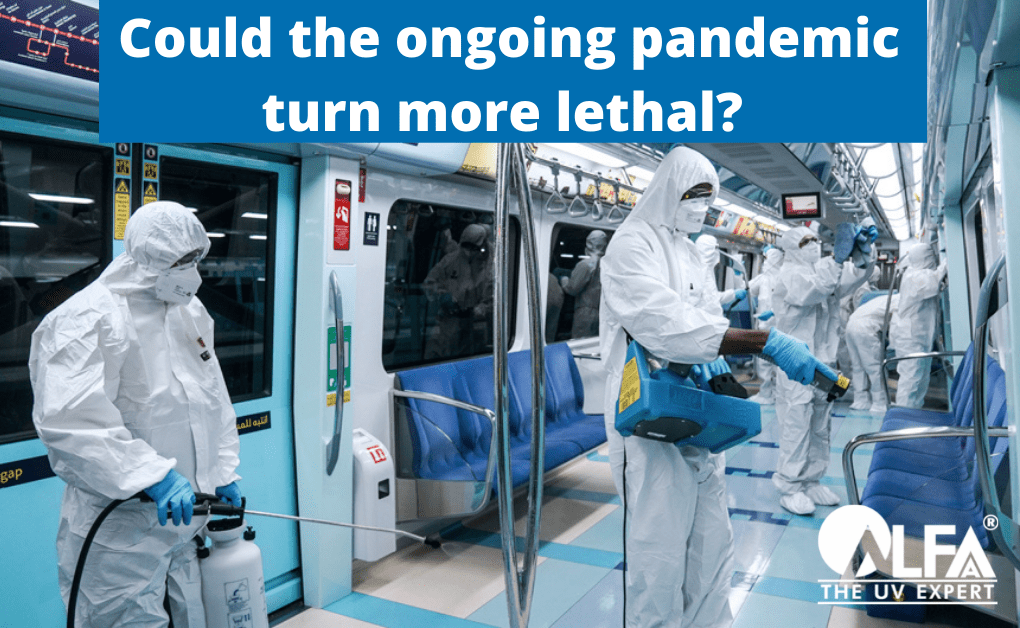 FUTURE PANDEMICS COULD BE MORE LETHAL THAN COVID-19. CAN UVGI SOLUTIONS TACKLE THIS?